“Be strong and courageous. Do not be afraid or terrified because of them,
for the Lord your God goes with you; he will never leave you nor forsake you.”
~ Deuteronomy 31:6 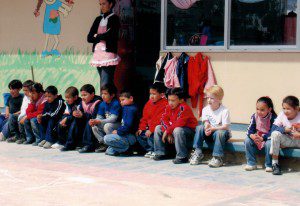 I led my firstborn to the concrete classroom with the green metal door and faked a bit of confidence.

Micah did not want to go in just as much as I did not want to leave, so we stood there squeezing hands and scanning the crowd. Dozens of brown eyes stared like they’d never seen white people.

It was March—not the best time to enter a new school. Especially in another country. We had only lived in town for a week and knew about three people. There was no welcome for the new kid. No name on a desk. No assigned buddy to show him the ropes.

You would think it was a Friday since two classes of kids were squished into one room watching a movie. I’m pretty sure it was a Monday.

Desperate for a smooth transition, I pointed out the obvious: a Disney movie! Micah was unimpressed. The sea of strangers who couldn’t speak or understand English made him apprehensive at best.

An empty space on the back counter caught my eye and I gently urged him to go sit between two boys. He walked in their direction with reluctance while I had visions of new friends who miraculously did not need language to become life-long buds.

My dream was short-lived.

Who knows what was going through the minds of those little guys when they slid together and closed the gap. Micah turned, pierced my eyes with panic, and hustled back to my side. His eyes filled with tears, I wrapped my arm around him, and we turned to leave. We weren’t actually going to leave; I just didn’t want the kids to see my eyes filling, too. 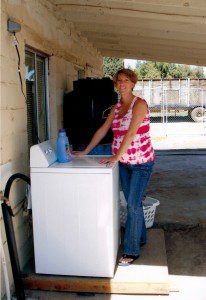 He was four-and-a-half and I was eight months pregnant. Clearly we were not a good emotional pair.

If you have ever expected pre-schoolers to show hospitality, you’ve likely been disappointed. Most four year-olds don’t even know the meaning of the word much less how to extend it. So I gave them grace and we made our way to a bench.

Everything in me wanted to whisk my boy home so we could cuddle on the couch and watch our own Disney movie. Logic reminded me not making him go would foster more drama tomorrow. So we stayed.

For over an hour we sat on that bench, wiping tears and giving half-hearted smiles to the janitor who kept walking by.

I barely understood two words, but I saw him at church and his body language told me he was kind.

Yes, Cuco, it was difficult for the mom, too.

The next day we went back. And it was terrible again. But we kept going and it slowly got better. Let me tell you though—leaving my little gringo at the gate with that look on his face? Come ON.

The day he got kicked in the stomach was the day I felt mama bear emerging. Not the cute black bear kind—the psycho grizzly kind.

Would you have judged me or joined me in my thoughts of tracking that kid down and doing who-knows-what once I found him? Yelling at him in English would not have accomplished much, and an angry game of Charades would make me look like the new unstable white chick in town.

When my husband asked Micah why he got kicked he had no idea. No clues with a toy… ball… swing? Nothing? There had to be some reason why this child would haul off on the new kid.

Was it Micah’s hair? Freckles? Skin? Maybe a little of that, but probably just kids being kids. A local friend later commented, “They didn’t know what to do with him.” They weren’t sure if Micah was super cool or a weird-o.

I kept reminding him even if he went to an all-white school in the States, he would probably still get picked on for some random reason. You can be the most popular kid in the 12-and-under category, but we all know any minor difference will get you comments from smart aleck bullies on the playground.

Did your name rhyme with something? Were you short for your weight? I got the jingle, “Hairy Carrie the big fat canary.” I was neither fat nor hairy, but apparently some ding-dong thought he would try his hand at rhyming. I’m not bitter, I’m just sayin’.

Micah did not ask to live in a foreign country. God moved us here with a child who wasn’t old enough to have much input. Although he appeared to just be along for the ride back then, I always wonder if we were pulled from our comfort zone for God to be able to use one of our children in a different way than we ever dreamed possible. 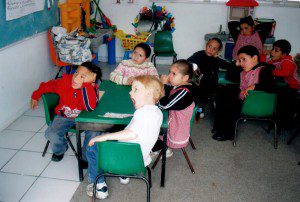 Regardless, Micah is well aware he looks polar opposite. He is fluent in Spanish and has been in school with those original kids for ten years now. But even his closest buddies still make comments about his hair, feet, sunscreen habits and the freckles gracing his face and arms.

Don’t bother calling them ‘angel kisses’ either; he got over that one years ago.

Has anyone in your family been bullied? Parents aren’t the only ones who can comfort and speak truth into the life of a bullied child. Extended family can make a huge impact—with and without words.

Sometimes Micah hides his hurt and stuffs it down, other times he goes off like Mentos in Coke. Either way he knows my husband and I are here for him.

Give a hug, write a note, share a compliment. I recently read that the year tweens and teens start pulling (and pushing) away is the time when they need more love than ever. I know it’s easier said than done, but don’t take their cold shoulder personally. I’m slowly learning it’s usually not about us.

From crying at the gates and playing by himself, to leading the drums in the marching band and working in our church’s sound booth… the white boy has kept on pressin’ on.

High school is rapidly approaching and I can only imagine the stories we’ll be hearing from the front lines of a much larger Mexican school. Tempting as it might be to pray for no pain, we will continue to pray for God’s will in Micah’s life. 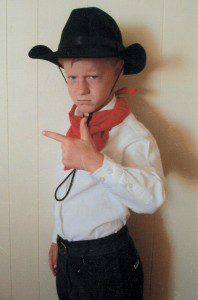 P.S. This is pretty much how Micah felt about walking in the Mother’s Day Parade.