Besides short children running out in front of my car, picking up our youngest at 3:02 is usually a mellow event. The kids lug backpacks large enough to climb into, are mostly all in a hurry, and not too concerned about motorized vehicles.

When local police show up, two men packin’ heat and one cone can do wonders for the chaos. No need to be fluent in Spanish to follow along; the flat hand held in your direction is a universal symbol. Stop or else.

On this particular day my 12-year-old accompanied me. The bell rang, we greeted the only gringo (ours), and pulled between a sea of dark hair, quads and clunkers.

I turned right and pointed toward home while my oldest yelled and made me jump.

“Micah. Please do not yell in the car. I have told you befo—”

Doesn’t matter how talented you are—seventh grade is not the year to sign up for driver’s ed. Then again, my mom learned to drive a tractor and stick-shift truck at age 13 on her uncle’s dairy farm. I’d be jealous if it weren’t for the aroma.

True story—Micah’s friend barely peeked over the wheel, but somebody gave her the key to an old Toyota 4Runner and sent her out to fetch her brother. I’m guessing she had not logged hours with an adult over the age of 25, but apparently she’s responsible enough to trust. 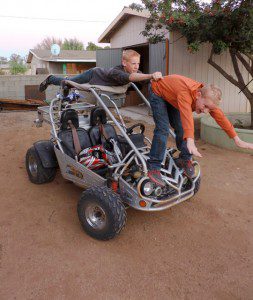 When we lived on a large piece of property, Micah learned to drive a donated dune buggy when he was nine. He drove it, flipped it and loved it for over three years. But soon the allure of a car started calling his name and he asked if he could get behind the wheel. As a former strict rule-follower, I still had tendencies of wanting to say no. As a former strict rule-breaker, my husband had tendencies of wanting to say yes.

We had a brief conversation about it and then let him start our run-down Explorer and back it up about 20 feet. Weeks later I taught him the three-point turn, which sometimes morphed into five. Then we let him back it up, turn it around and pull through the chainlink gate.

One day he asked if he could drive through the riverbed. Before I could answer he quickly informed me, “Dad already let me drive down the dirt road.” I couldn’t think of a good reason why he couldn’t… so I said yes.

Lest you assume we’re crazy or being irresponsible, let me explain.

We are a little.

But here’s why: his long legs could reach the pedals, our car is heck-a old, and he asked nicely. Are those good enough reasons? They are when you live in Baja near a riverbed.

Besides the fact only one paved road exists between towns, local police don’t care if you’re driving before you’re shaving. Obey the stop signs, park on the right side of the road and don’t speed.

Olive trees and barbed wire line some of our riverbed, but mostly it’s just compacted sand. Reminds me of learning to drive in a church parking lot; there were light posts to hit and curbs to jump, but for the most part it was wide open. Anyone else remember popping the clutch and grinding the gears? Good times right there.

I also said yes to Micah because I recently heard about Never Say No, by Mark and Jan Foreman. In the book he talks about being open-minded and saying yes to our children as much as possible. Not yes to daily candy, dating in fifth grade or taking them to Hawaii every month. Yes to adventures together, even if they don’t sound like fun to us. And yes to playing board games, even when we know we’ll be bored.

His motivation came from his own experience with his father. He kept asking him to play, watch and listen while his father kept reading the paper and putting him off. Eventually Mark reached the pinnacle of rejection and stopped asking.

“Your child knows you love her,” he says. “That’s expected. But she wonders if you like her. Doing what she likes to do with her is an easy way to show you like her.”

Our young children want to be with us. If we keep putting them off, telling them to go away, or continue to say, “maybe later,” chances are they’ll stop asking us to be part of their lives.

I don’t say yes to every plea, and I am not interested in being my son’s best buddy. I do want to be involved in his life though, and I want him to keep asking me to spend time with him—even if it puts me in the passenger seat. 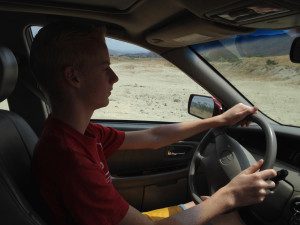 The first few outings with Micah behind the wheel were surreal, but apprehension diminished when I experienced his cautious demeanor. He let everyone else go at the 4-way stops (even when it was clearly his turn), and in the midst of asking where those “red flashy lights” were, he turned on the wipers. Been there, buddy.

When Micah turned 14 I realized I could count his years left at home on one hand. If the majority of our solo time is spent learning to drive, so be it. I correct the parts needing help, and compliment the times when he makes great choices. And he beams.

Now most afternoons at 2:59 I grab the keys to go fetch our youngest and tell Micah I’ll be back in a minute. To which he responds, “May I drive?” We each know what the other one is going to say, but it’s our little thing. “Yes… I’m leaving right now though.”

I suppose I could start offering to let him drive, but then we wouldn’t have this special tape recording between us. We head out the door, he backs out between cinderblock walls, and we bump down the dirt road.

He negotiates his way through little people, waves to the policemen directing traffic, and parallels over to the school fence to wait for white boy #2. His technique might not fly at the DMV, but if we’re not crashing then it’s another successful trip.

After four years of driving in this hamlet, I’m hoping he’ll be ready to navigate the poorly paved roads, dramatic ditches and 18-wheelers in the city of Ensenada. In the meantime we’ll stay in the dirt with the chickens and horses.

Besides, if I ever get tangled in the laundry line, hit my head on the water tank and pass out, Micah can drive me to the clinic.

If he can lift me. 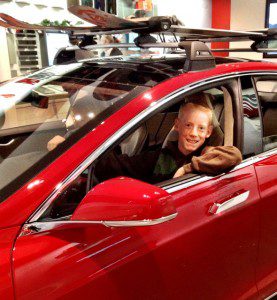 On the Tesla show floor. Dream on, son. 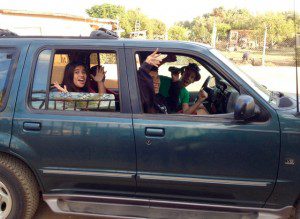 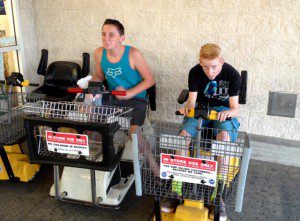 If you have kids, nieces, nephews or grandkids, do you try to say yes as much as possible? The next time they ask you to play, color, dance, wrestle or cuddle… think about saying yes. And then say it.

Did you learn to drive something before you had your permit? Do share!