This post is part of Lysa TerKeurst’s Uninvited Book Blog Tour which I am delighted to be a part of along with many other inspiring bloggers. Are you a blogger? You’re invited! Do you know a blogger? Invite them!

For the first few years I lived here I didn’t feel like it was okay though. I wanted to fit in so I could stop feeling insecure. I wanted browner skin, better Spanish and a clue about how to make tamales.

Of course not every Mexican I’ve met falls into these categories, but for the most part…

Insecure is not me. Ever since I got away from the overrated popularity contest in high school and college, my confidence has been just fine.

I married young, worked hard, bought low, sold high, birthed a baby, and said yes to almost every social event that came my way. I threw the Super Bowl party, worked in the high school youth group, swam in the sea of scrapbooking, and pushed the rad jogger with friends who also had rad joggers. Because I could.

Livin’ the American dream was never a goal, but there I was.

And then God moved us to Baja. As in, Mexico.

And I flashed back to the first day of high school. I was smart enough to walk around the Senior Lawn and not through it, but they still yelled, “Freshmen suck!” while I bee-lined to my new locker.

Eighteen years later, that memory flooded me. I was smart enough to walk around to the back of the room at the women’s event when we moved here, but their eyes still yelled, “You look weird!” while I bee-lined to my chair.

I found out later their stares weren’t saying that at all—they were actually staring at me in a good way.

In a, “Do you think she speaks any Spanish?” sort of way.

Stares never make me feel confident though so I assumed a certain number of people didn’t like me. Whispers are even worse. I now understand why parents and teachers remind children in that sweet, sing-songy voice, “No secrets, please. They make people feel left out.”

For all I know they could be whispering about how they like my gringo flip flops, bright pants or granola necklace. But the action resembles gossip, judgment and the mean girls from the playground.

Uff da. I do not miss them.

Jesus didn’t totally fit in either. He made people uncomfortable and they talked about him behind his back. I don’t recall anywhere in scripture where he’s described as feeling insecure though.

On the flip side, he’s never described as being arrogant either. “All of you, take up My yoke and learn from Me, because I am gentle and humble in heart, and you will find rest for yourselves.”  ~Matthew 11:29

He modeled a balance of humility and confidence. I want that.

Even with a fast pass at the border and national paperwork saying I belong, I will never be Mexican, my hair will probably never be black, I rarely ever get invited to parties, and I still don’t know how to make tamales. I learned what’s in them. (Dang it.) 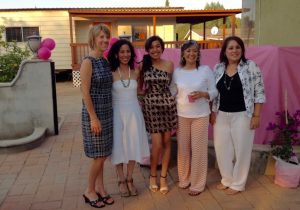 So I started reaching out… even when I didn’t feel like it. I smiled first, said hi first, shook hands first, offered a hug first. I fought every awkward bone within me, stepped out and became friendly. And most women loved it! And some did not. So I questioned myself again.

But I kept moving forward.

And ten years later I can honestly say I am caring less and less about what people think.

If that sounds pathetically noncommittal it’s because Satan still hits me with waves of insecurity. I buck his efforts, and he strikes again.

But I know to Whom I belong. My identity is not wrapped up in how well I hang laundry, if I can sweep with perfect wrist action, or if I know all the words to La Bamba.

(Decades of faking it at weddings and I finally discovered the song’s about needing grace to dance. And that Ritchie Valens is a captain, not a sailor. You’re welcome.)

“Fitting in is boring. But it takes you nearly your whole life to work that out.” ~ Clare Balding

“If you are lucky enough to be different, don’t ever change.”  ~ Taylor Swift

“Be yourself. Everyone else is already taken.”  ~ Oscar Wilde

Sounds great, but it’s not an easy fix. Sure, I can put on the confident face, stroll through town like I have somewhere to go, and wave my “fitting in is boring” flag.

Do you think that makes quiet Saturday nights something to look forward to? Ha. Memories of our old social life come calling here and there, and occasional loneliness sets in when I remember the ridiculous fun with old familiar friends.

This is where God has me though. He doesn’t promise non-stop fun. Or safety. Or comfort. Or easy.

But He promises good.

I see the good when our family connects over chocolate chips and poker chips, and when there’s nowhere to go so we hunker down and cuddle. And when we step out, invite someone new in, converse in Spanish and realize it wasn’t as awkward as we thought it would be. 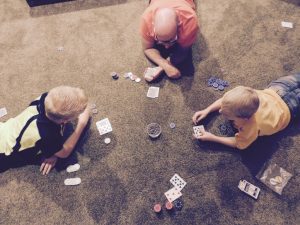 Sometimes I get stared at, questioned, laughed at and left out. Other times I get smiled at, answered, laughed with and included. It’s a rollercoaster, and occasionally I need to step off, let my stomach settle and breathe. Then I flash my wristband, sit down, buckle up, and hold on for the next adventure.

“And we know that in all things God works for the good of those who love him,

who have been called according to his purpose.”

Have you felt left out recently?

What helps the most when you’re feeling uninvited?