Hernando Cortes was the Spanish conqueror of Mexico.

If history doesn’t float your boat, you’ve found a friend. It was never my strong subject, and Mexico was never my dream destination.

And then God, in all of His wisdom and humor, sent me a history teacher to marry and sent him a vision that took us out of the States and into Baja.

As a result, I read about this Hernando guy in a whole different way….

In 1518 he convinced Diego Velazquez, governor of Cuba, to give him command of an expedition to this new land to establish a colony and capture its treasures. He was given 11 ships and 600 men to make the journey.

After months of travel and hardship, they arrived at their destination. He knew his men were tired and wanted to go back home.

To prevent thoughts of retreat, Hernando burned the ships. 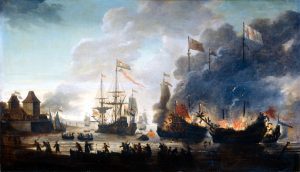 Call him loco or just plain mean, but he was obviously committed to the task at hand. So much so that he obliterated all options for escape.

When God called us to leave the comfort of our home, jobs, friends and lifestyle, I felt a strange mixture of surprise and peace. I trusted my husband, but I trusted God more. Plus I didn’t want to get to the end of this life with regrets about not stepping out of the boat.

So I was all in. Sad to leave, ready to go, and thrilled to part with excess possessions.

But I wanted to keep our house.

We had only lived in it for two years, and it had everything we wanted: open great-room, fantastic floor plan, three-car garage, and four bedrooms. It was a house our family could grow into, with plenty of space left to still have overnight guests, bible study groups, Super Bowl parties, etc.

Add in a great neighborhood, proximity to schools and shopping, and bam—our comfortable nest for at least the next 28 years.

Naturally I thought it would be wise to keep it for two reasons.

1. We could rent it out and make a little money.

2. We would have a place to return to if our adventure didn’t work out.

I had no intentions of giving God a time-frame commitment, but a backup plan didn’t seem like a terrible idea.

My husband wanted to sell the house and we agreed that the possibility of dealing with rental problems from so far away sounded daunting.

But I still wanted to keep it.

We weren’t fighting, just presenting our own sides with intentions of trying to convince each other how logical our plan seemed. And ‘round and ‘round we went.

Until one day he said, “Okay—you can try to rent the house. But it’s all you.”

Fantastic. I knew he would eventually see the wisdom behind my idea.

Since Craig and his fabulous List didn’t exist yet, I turned to the good ole’ newspaper. The calls and visits started right away.

“Your house is beautiful, but the price is too high.”

“I love the description, but can you bring the price down?”

No, I couldn’t—I had already brought it down to our mortgage amount. The thought of paying a few hundred dollars every month didn’t make sense while we were on the mission field. I thought renting it to at least break even was wise.

These calls and visits went on for three months. Twelve weeks of assuming the next family would be the one. Eighty-four days of keeping the house über clean with a preschooler under foot.

In the midst of this, we were also approaching year two of infertility. Our little guy talked of his fourth birthday while my husband and I talked of sadness and confusion.

Every month (sometimes on the verge of tears) I prayed the same thing: “Your timing, not mine.”

And then one morning my husband gave me a strange look.

“I had a dream last night.”

“We were in a canoe. I sat in the front, you were in the back and we were paddling.”

He continued with our dream dialogue and the strange look.

“Can you paddle harder?”

He turned around and looked behind me. Our taut rope led his eyes from the end of our canoe right back to the dock. 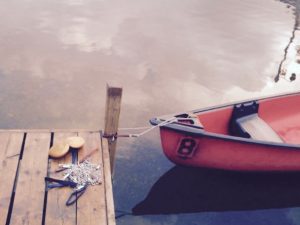 I didn’t need an explanation, but I did need a minute.

The timing of the dream was too strange to ignore, but I knew if God wanted us to sell He needed to change my heart.

Two years is not a long time in one house, I know. But I felt more ownership than I thought. We chose those countertops, painted those rooms, picked that stain, chose the patio shape, upgraded that carpet, added those lights, planned that mural, and added those gutters. Our hands flipped that dirt, planted those plants, and pulled those weeds. 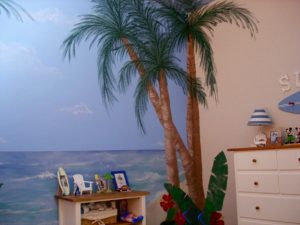 Now some stranger was probably going to paint new colors, hang weird art and let the yard go to pot. Oh my gosh—what if someone grows pot in my sweet backyard?

The next week I reluctantly watched my husband hire a real estate agent and thought about sitting on our cushy carpet surrounded by nothing. A big empty house, full of love, and a guaranteed future in middle-class suburbia sounded great.

I’m willing to give up all this stuff; just let me keep the house!

Instead God decided to take the house and let me keep all of our stuff. Bleh.

Friends and family told us we were crazy for selling, which we realized was their way of saying we were being dumb/unwise/illogical. They said we’d never get back into the Temecula Valley if we left now. Housing prices were still climbing and we were selling.

By the world’s standards, we felt foolish.

The house went on the market and I braced myself for a substantial wait; who would want a house at this price?

Day two—an offer and a counter.

The year? The middle of 2005. Anyone who owned a home at that time will remember how housing prices had almost hit their peak and were about to plummet.

The whole process would have been easier to swallow if we had kept our eyes 100% up instead of occasionally looking left and right. Though we moved forward with the plan we felt God gave us, human opinions seemed to matter more than they probably should have.

Most people were very supportive, but we still got those looks and questions from well-meaning friends and family.

“Why would you give up this life?”

“You’re moving to a Latin American country? Why?”

And my personal favorite…

“Are you taking your son?”

We’ve left him before, but yes—I think we’ll take him with us this time.

And that was that. We had two huge garage sales, sold more than half of our possessions, signed on the line, packed a truck, handed over the keys and drove away. 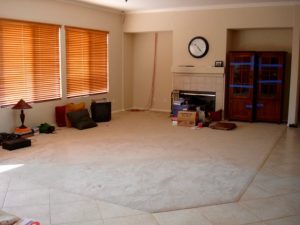 But don’t you dare assume it was an easy process just because I described it in one sentence. I didn’t have any second thoughts, but I did feel down.

Our house—the one I thought we’d retire in, faded in our rearview mirror. I trusted God’s plan, but it still hurt. He asked me to give up a handful of painless things, but this one? Ouch.

And then… a plus on the plastic stick.

After all those months of waiting, praying and trusting, He allowed me to get pregnant in the same month we gave up all of our security and comfort. We burned the ship and he blessed our faith.

I didn’t care how loco we looked. Obedience produced two blessings: our house sold for a high price which gave us enough money to buy a house down here, and another peanut was on the way.

The timing seemed bizarre, but my faith soared.

A couple months ago my bible study group finished Discerning the Voice of God by Priscilla Shirer. I recently looked over my notes and found highlighted points, reminding me to never let up when it comes to listening and obeying His voice:

“Over and over Scripture makes clear that the determining factor for experiencing God is obedience.” (I want that.)

“Obedience will always produce benefits that far outweigh the consequences of disobedience.”

“A life of obedience calls me to prepare for the adjustments God requires.” (Flexico, y’all. Being flexible in Mexico.)

“God speaks with perfect timing. My response should be immediate obedience.”

Has God ever asked you to do something that seemed shocking or unreasonable?

Do you need to untie your canoe in order to move forward?

Is God asking you to burn a ship? Give up your safety net? Cut a cord?

Don’t ignore such promptings. You never know what kind of blessings are on the other side of obedience.

Share this...
← Cow Tongues, Colostomy Bags & The Donut Man
Her Jewelry, My Truck →